How does the Bologna Process work?

The Bologna Process, launched with the Bologna Declaration, of 1999, is one of the main voluntary processes at European level, as it is nowadays implemented in 47 states, which define the European Higher Education Area (EHEA).

Members of the Bologna Process are the 47 countries, together with the European Commission, and the consultative members, namely the Council of Europe, UNESCO, EUA, ESU, EURASHE, ENQA, Education International and BUSINESSEUROPE.
Every two or three years there are Ministerial Conferences organised in order to assess the progress made within the EHEA and to decide on the new steps to be taken (more information can be found in the table below).
Ministerial Conferences

In order to ensure the implementation of the steps upon which the Ministers have decided, the EHEA makes use of several support structures.
The main follow-up structure is the Bologna Follow-up Group (BFUG). The BFUG oversees the Bologna Process between the ministerial meetings and meets at least once every six months, usually for one-and-a-half days. The BFUG has the possibility to set up working groups to deal with specific topics in more details and, also, receives input from Bologna Seminars. The BFUG is composed of the representatives of all members of the Bologna Process and the European Commission, with the Council of Europe, the EUA, EURASHE, ESU, UNESCO, Education International, ENQA and BUSINESSEUROPE, as consultative members. The BFUG is being co-chaired by the country holding the EU Presidency and a non-EU country, which rotate every six months. The vice-chair is the country organising the next Ministerial Conference.

The work between two meetings of the Bologna Follow-up Group is overseen by a Board.

The composition of the Board changed in 2010, together with the adoption of the document “Briefing note for decision by the Ministers” (BFUG (ES) 20_7c).

The current members of the Board are:
• the EHEA Chairs double Trioka (the outgoing, present and incoming Chairs of the EHEA);
• the EHEA Vice-Chairs;
• the European Commission;
• four consultative members (Council of Europe, EUA, ESU, EURASHE).
The proceedings of the Board meetings are recorded by the Bologna Secretariat, who is permanently invited to Board meetings.
The overall follow-up work is supported by a Secretariat, provided by the country hosting the next Ministerial Conference. The mandate of the Bologna Secretariat coincides with the period between two ministerial conferences, and it is aimed to ensure the continuity for all the Bologna Process reforms, considering that the Bologna Process is chaired by the country holding the EU Presidencies, which rotates every six months.

The central task of the Bologna Secretariat is to support the work of the Follow-up Group at various levels: BFUG, Board, Working Groups, Networks, Ad-Hoc Working Groups and Seminars. The Secretariat prepares draft agendas, draft reports, notes and minutes and carries out the practical preparation for meetings as requested by the Co-Chairs.

Another task of the Secretariat that has become increasingly important is to provide up-to-date and reliable information about the Bologna Process (for both a European and a non-European audience) and to maintain an electronic archive. To fulfill those functions, the Secretariat makes use of the EHEA permanent website as a central tool.

It is noticeable that the main advantage of the Bologna Process and the present support structures is that they enable the key stakeholders to work together as partners, and having a relatively informal character, thus increasing the sense of engagement and ownership among all participants.

To implement the Bologna reforms and to make progress in all priority areas, strong efforts will be required especially at national and institutional level. To support these efforts with joint action at European level, the Ministers entrusted the Bologna Follow-up Group to prepare a work plan for the period leading up to the next Ministerial Conference.
As part of the 2012-2015 work plan, the Bologna Follow-up Group set up four working groups on the following topics:

The 2012-2015 work plan includes Annexes (Terms of References) for each working group, ad-hoc working group and network (see below):

Disclaimer:
A short overview of the EHEA functioning (according to the 2012-2015 work-plan) is presented below: 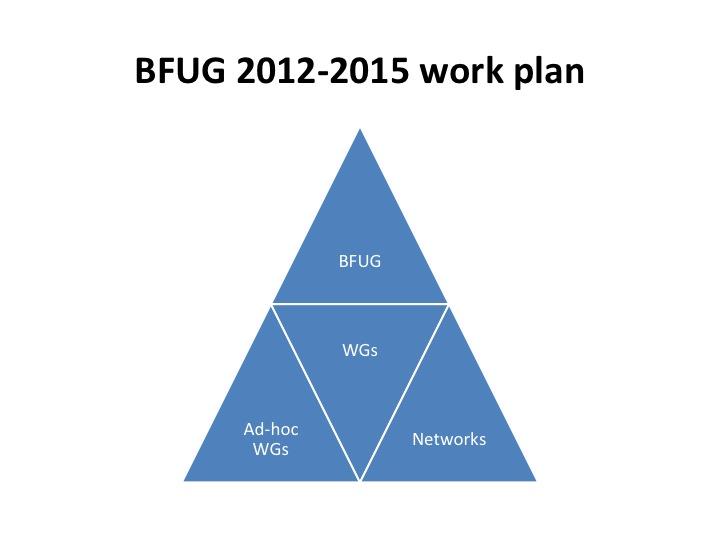